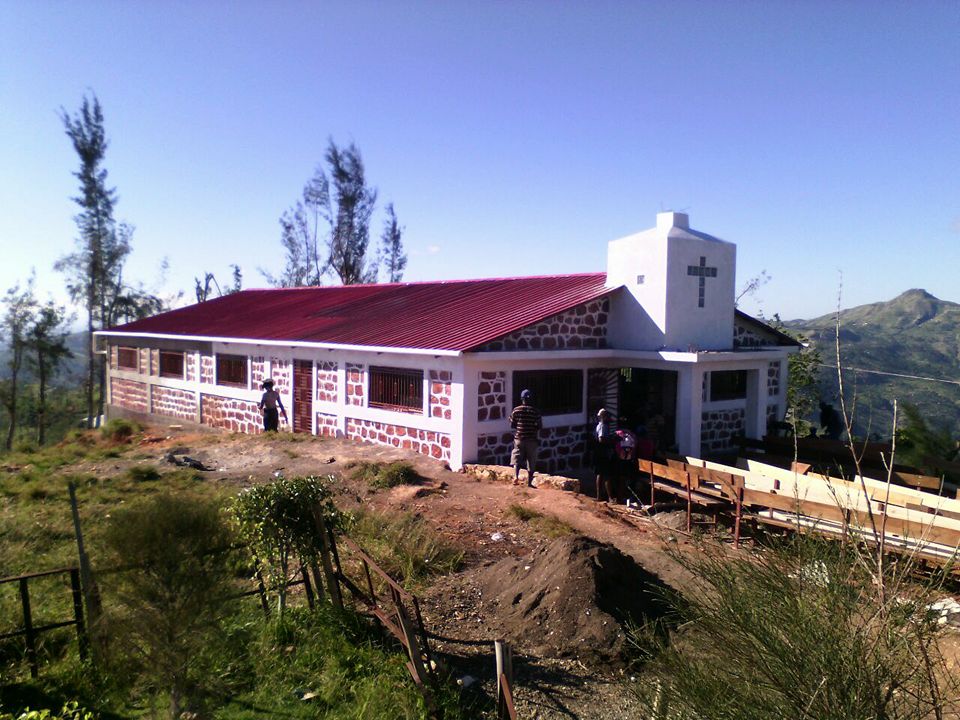 We finally arrived at the top of Le’palm mountain. We reached LaFond! I consider LaFond my second home. I have stayed there many times, and have many friends there; however, this visit was different. I had never seen the village so full of life. I had never felt the energy that was in the air that day.

When we arrived, it was too slippery to take the motor cycles down the path to the school and church, so we got off and walked.  As we walked down the slick incline, we could see the church building. It took my breath away. It was finished! Two years of fundraising–two years of slowly making it happen–to now see it finished and beautiful. I was speechless.  We could see the hubbub of ladies working together to cook for the celebration dinner the next day. And, in the middle of the soccer field there were multiple benches filled with children sitting in a circle taking art lessons and painting for their very first time. The men were busy setting up places for people to stay, kids who weren’t painting were playing soccer, musicians were setting up their instruments, and choirs were practicing. People were talking and laughing and taking in the moment. THERE WAS SO MUCH HAPPENING!

When I walked into the church building, I was overwhelmed. Tears filled my eyes as I looked around.  I saw the tile floor, the stained and painted walls, and the hand carved pulpit. I saw women hanging decorations and heard instruments being warmed up. But more importantly, I saw pride. I heard joy in the voices of people who had built the church, who had laid the stone, who had put on the roof, wired the building, painted the walls, put the benches together and so much more as they told me the LaFond Church is the talk of the mountain, that there isn’t another like it, and that nothing compares to its beauty. Their voices reflected a pride they could take as their own, because no one built it for them. They built it.  It was made with the sweat from their own brow; it was made by the skill of their own hands. However, they wanted to share the pride and joy with us–Pastor Tom, myself, and all of you.  Because, they knew that without the financial help it wouldn’t have happened. And, they knew that God had blessed them through our aid.

After I pulled myself together, I walked out and went over to talk to the ladies working diligently to cook the celebration dinner. There must have been at least 25 women working together all under the command of Madanm Meance, Pastor Jacques’ wife. Never once did I see her looking flustered or rushed. She is always a lady of grace and beauty. The ladies all did their jobs with ease and joy. Some were sitting in circles cutting up the meat from the cow we bought. Some were keeping the never-ending supply of dirty dishes clean.  Some leaned over the hot fires cooking while others were busy cutting vegetables to make the salads and broths–all of them talking and laughing enjoying the excitement of the day around them. As I approached the circles of ladies, they were anxious to show me what they were doing and talk with me. They would laugh but encourage me as I did my best to speak in Creole with them. And, from time to time, I would have to remind them to talk slowly so I too could understand what they were saying to me. They worked tirelessly throughout the day and some of them even stayed up and cooked all throughout the night. They would feed over 500 people Sunday afternoon.

Saturday night came and someone called us out to come look at the church. Pastor’s sister had come from NJ to be part of the celebration and brought with her a green Christmas light to shine on the church. It was one of those lights that casts light upon the building so as to make it look like there are green sparkles all over it. I also had brought a “disco light” over for one of my friends, not knowing why he was asking for it. They had placed the disco light under the cross and turned it on. The church was lit up against the dark mountain sky.  The green sparkles all over the front, and the multi-colored flame under the cross created by the disco ball were brilliant. Again, there was excitement in the air. People were standing all over the yard between the school and church in awe of the beautiful site pointing, talking, and taking pictures and videos.

When I finally made my way to Ghilsin’s cabin around 9 p.m., the ladies were still prepping and cooking. The musicians were still warming up, and choirs were still practicing. My heart was full. I couldn’t understand why God had chosen me to be part of this great event, but my heart was overflowing with love and contentment. So, I whispered “Thank you.”

Earning Trust and Friendship… and The Move